One source for purchasing the book discussed in this Guide,
The Tower of Geburah,
would be amazon.com; click on this cover for more details: 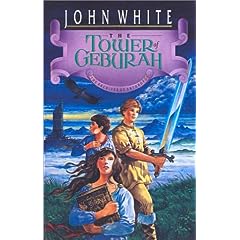 On Page 8 of TOG (Tower of Geburah), you'll find a drawing titled, "The Kingdom of Anthropos," and on page 9, another one of "The Ancient City of Bamah [the Hebrew word for a 'high place'] and the Lower City of Nephesh."   We'll discuss these later when they become important in understanding the story.  Please note: We're trying to help people of all ages learn more about what they are (or have been) reading in TOG; those who are wiser than most will realize just how difficult a task this is is to carry out.  IF there's anything you still need help in understanding, you can write to us by clicking here!

Quotes from TOG, are taken from the 1978 InterVarisity Press edition; Copyright©1978 by Inter-Varsity Christian Fellowship.

Characters introduced in this chapter are:

Wesley, his brother Kurt and their sister Lisa. They are staying at their Uncle John's house in Winnipeg, Canada (Kurt mentions 'Winnipeg' in Chapter 5, page 54. Winnipeg is in the province of Manitoba and roughly 65 miles directly north of where the Canadian border meets the borders of North Dakota and Minnesota in the United States).  For some reason, their Uncle John had to "take the first plane flying east to Toronto," leaving them alone for the weekend (page 11. Toronto, another Canadian city, is in the province of Ontario; it's about 1,300 miles east of Winnipeg. This would be similar to traveling from Fargo, North Dakota to Buffalo, New York).

Mrs. Janofski, who lives next door, was supposed to come over and check on them, but before she could, the three of them decided to go up into the attic where they found:

Five old, black and white TV sets, the kind built into large wooden box-like enclosures. (The description of this room reminded me of the attic in one of my Great Uncle and Aunt's homes; sadly, that building, which was close to Wheaton, IL, USA, was torn down to make room for a wider highway and/or some shopping mall.)

"Who am I, little maid?" You look upon Kardia, rightful king of Anthropos, unhappily now a prisoner in his own country. [TOG, p.20]

) is Greek for heart; the Greek Lexicon reference number of Strong's Exhaustive Concordance (from henceforth, Strong's Ref. #) is: 2588.

It took a while to discover the meaning of proseo comai. Although your first guess might be a phrase in Latin, it's actually a single Greek word which the author split in two. His Pronunciation Guide in the back of the book (pp. 404-405) says it sounds like "pro-SAY-oe  KOE-my" (where the 'oe' indicates a 'long o' like the OE in the word 'toe'). While the sound 'makes sense' for these two words in the novel, it could also be an obstacle for many young readers wishing to know which word(s) it's based upon. After searching through some lexicons, and remembering what was said about these 'stones' in the story, we're convinced these two words are from the single Greek word Strong's Ref. # 4336) which means to pray or to offer prayer.

The Shepherd's father in ages past gave them to the realm that it might prosper. [TOG, p.22]

Can you guess who "The Shepherd's Father" is?

Lisa was about to say, "I don't believe in magic." But before the words came out of her mouth she realized she wouldn't be speaking the truth. [TOG, p.22; especially if this wasn't just a dream! And by now, we think she realized it probably wasn't.]

Note: "magic" is what Lisa called it.  She should have used the word, miracle, but she didn't know enough about such things at that time!

"Come and sit beside me, Lisa. I know not why the stone has answered my longings with a maid. Nay, do not weep. The stone has sent you to help me." [TOG, p.22]

The first time you read this, you might think the king is just as much 'in the dark' (has no idea what's really happening) as Lisa, since he talks as if a 'stone' could possibly think for itself (he said that it 'sent' Lisa to help him). But from his earlier words ("The Shepherd said you would come to rescue me"), it's more likely he believes the stones are actually used by the Shepherd to carry out his will. So what Kardia really meant was: "the stone [which the Shepherd used] to send you to me." As you read more of the story, this will become clear to you.

He who now calls himself king is a sorcerer. The books warn of such but I heard of his fame from afar. It was I who invited Hocoino to Anthropos. [TOG, p.22]

Hocoino (sounds like: hoe-koy-no) seems to be related to words like hocus in the phrase 'hocus-pocus' and this name appears to mean deceit or to deceive. Thus he deceived the king in some way to become the present ruler of Anthropos.

They will get word to the Princess Suneidesis, my bride-to-be. [TOG, p.23]

A 'jinni' (among its alternate spellings are 'jinnee' and 'genie' — in American English) is a spirit believed by some Muslims to inhabit the earth, and capable of assuming the form of either humans or animals while they exercise a supernatural influence over people. It's obvious to true Believers that this is nonsense, and it appears to me such a belief is a corruption of the Scriptural concept of angels.

Only I know that we are in the southern forests, either of Anthropos or of the land of Playsion, a country south of Anthropos. [TOG, p.26]

"Forgive me, little one. I expect you to have knowledge which you could not possibly have. In the north is the great star, Numa. No other star in the whole sky is as bright as he. He will be your guide. As for your journey and all you may meet in the course of it, I doubt not that he who sent you hither will guide your steps." [TOG, p.27]

We believe White created the word Numa from the Latin verb numera; which means to count or to number, as found in the phrase, "count the stars, if you are able to count them" (Genesis 15:5).

Although Kardia uses the word 'he' to refer to this star, you need to know that most languages in our own world also use 'he' or 'she' to refer to things, as well as the gender of people or animals. Many languages refer to everything — even abstract ideas or emotions such as joy, peace, love, etc. — using one of  three different genders: Masculine ('he'), feminine ('she') or neuter ('it').  English happens to be one of the very few languages that does not do this!  French, German, Greek, Hebrew and Spanish are but a few of the many languages that have what we might call grammatical gender. For example, if you spoke German, you'd refer to a pencil as 'he,' a pen as 'she' and a book as 'it.'  People who grew up speaking such languages, may still refer to tools, equipment or any thing as a 'he' or 'she' instead of 'it' long after learning how to speak English.
However, when Kardia says, "He who sent you hither [here] will guide your steps," we're quite certain he's no longer talking about a mere stone!  Kardia must have believed Lisa would be guided by The Shepherd.

Many of the words in this chapter are an attempt by its author, John White, to make you feel as if you're hearing someone speak with 'an accent' (due to English not being their first language). Although we may not like the way he chose to do this (I sure don't), we'll have to accept this as being one method other writers have used in the past as well.
Example: "Hallo?" said a woman's voice, "Dis is a Missus Janofski. My husband he try to shovel da walk, an' he gotta bad pain in his chess."

Note: 'Centre' is not a misspelling of 'center.' This is how the word is spelled in certain Canadian titles and phrases, since they're derived from British English.  For example, the British spelling of 'meter' and 'liter' are: 'metre' and 'litre'.

Now we know for sure that Kardia believes "the Shepherd's Father" could be guiding Lisa!

Then, even though her eyes were closed, she saw a beautiful blue light. In some inexplicable way the light comforted her and took away her terror enough that she opened her eyes.  The light shone, blue and piercing,... [TOG, pp.40,42.]

Blue light is very symbolic in this story!

I cannot be certain, but I think it is the Mashal Stone. If it is, then it has power to bring hidden things to light and make honest things invisible to natural sight. [TOG, p.48]

The Mashal Stone — the blue stone on a pendant that Lisa found.
Mashal (

THERE IS, OF COURSE, A GREAT DEAL MORE WE COULD SAY ABOUT THIS BOOK AND ITS CONTENTS, BUT ONLY SO MUCH TIME IN THE DAY. THERE ARE 31 CHAPTERS IN THIS BOOK, SO WE MAY NEVER FINISH THIS GUIDE. Your comments would be appreciated.
The Editor -- Daniel B. Sedory.